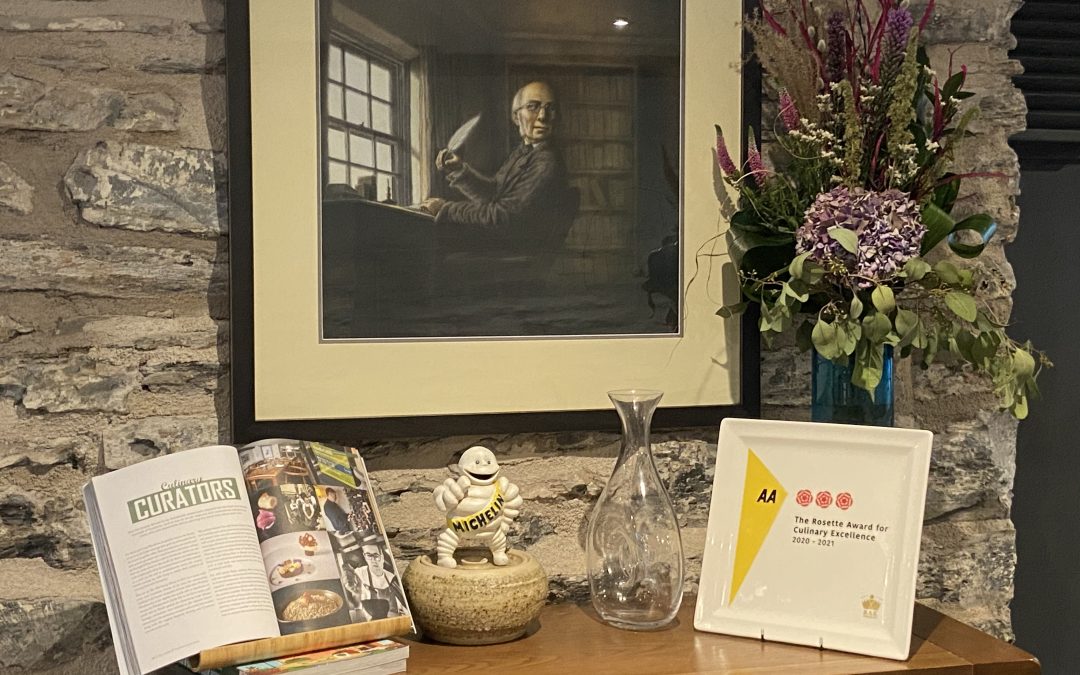 Ryan and Craig Blackburn tuned into a virtual awards presentation on 27th October to discover they had been presented with three AA rosettes for culinary excellence, recognising the quality of the food served at their flagship restaurant, The Old Stamp House, Ambleside.

The restaurant was first opened in 2014 by the brother’s, with Ryan as Head Chef and Craig as Restaurant Manager to offer a unique glimpse into the food and cultural heritage of Cumbria.

Ordinarily, the brothers would have attended the AA’s annual glitzy black tie event in London, which is attended by the great and the good and is one of the main highlights in the hospitality industry’s calendar, but like many other events that were due to be held this year it has been forced to move online.

Each year the AA’s inspectors hit the road tasting their way around the UK before announcing their Rosette recommendations, which are ordinarily announced twice annually in January and September.

There’s certainly no doubt that Ryan and Craig’s restaurant, in the centre of Ambleside, is keeping illustrious company, alongside the likes of Trivet, The Betterment by Jason Atherton, Hide Above, and The Barn at Moor Hall, whilst at the same time also helping to further enhance the Lake District’s foodie reputation, joining the ranks of some of the nation’s top restaurants.

The imaginative locally focussed menus created by Chef-Patron Ryan Blackburn have previously earned the restaurant two AA rosettes, which it has held since 2014. But now the Church Street restaurant has moved up a notch as one of only a handful of restaurants in the UK to be awarded three rosettes this autumn.

It’s plain to see that the simple food philosophy of head chef, Ryan Blackburn, has paid dividends. When it comes to his food, Ryan is determined to serve fresh local produce, deliver the highest of quality possible, and to keep his dishes innovative and exciting.

Simon Numphud, Managing Director at AA Media, announcing the new AA rosette awards commented: ‘’A small cosy restaurant in the heart of the Lakes, where contemporary cooking makes the best use of Cumbria’s larder. Congratulations to brother’s Ryan and Craig Blackburn and all the team at the Old Stamp House, Ambleside.’’

The AA Rosette awards, first appeared in 1956, which at the time was the first nationwide scheme for assessing the quality of food served by restaurants and hotels up and down the country.

Ever since the long-established Rosette scheme has celebrated successful cooking at different levels across the UK, with around only 10% of restaurants nationwide of a standard that is worthy of one Rosette and above, which is why those establishments presented with a 3 Rosette award are among the most highly regarded in their field.

Ryan and Craig Blackburn commented: ”We are delighted for the whole team at the Old Stamp House, this is a very proud moment for us all. This is the start of a long and rewarding journey for the team and I know we will all continue to push to be the best we can be in the future.”

For a restaurant to achieve a 3 Rosette award it must deliver outstanding standards time and time again. The cooking on display in the kitchen must be of the highest standard and the food created should be underpinned by the selection and sympathetic treatment of only the highest quality ingredients. The timing, seasoning and judgement of flavour displayed by the chefs in the kitchen should also be consistently excellent. But that’s not all because the award also takes into account the delivery of service by the front of house team, including the delivery of intuitive service and even if the wines within the restaurant’s list have been well-chosen.