Andy Beeforth spends a night suspended above the Borrowdale Valley 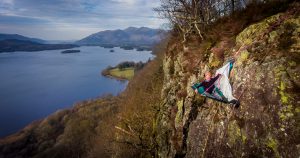 A charity worker set out to spend a night suspended hundreds of feet above ground to highlight the plight of older people who struggle to heat their homes in winter.

Andy Beeforth, chief executive of Cumbria Community Foundation, settled down for the night on a narrow portaledge above the valley.

His adventure aimed to encourage people to join him for The Big Sleep on March 9, which will see hundreds of people camp out on the shore of Windermere to raise money for the foundation’s Winter Warmth Appeal.

Despite lying still, a twist in the platform forced Andy to make a late-night retreat and climb up the rock face in the dark to complete his adventure under the stars at Surprise View near Keswick.

His adventure was supported by Brampton climber Jim Fotheringham, with permission from the National Trust.

Mr Beeforth said: “Every year I have my own little mini challenge before the Big Sleep. I’ve slept out on the top of mountains, tried sleeping in a bed on a lake, had a nap in a bed in a cave and this was the most terrifying.

“There’s a serious reason for doing it. In a bad winter 300 older people die due to the effects of the cold weather in Cumbria. Our Winter Warmth appeal saves lives. I will do almost anything to raise awareness of the amazing difference people’s fundraising can make.”

For more information about The Big Sleep, or to donate to the appeal, visit www.cumbriafoundation.org/bigsleep

Launch event of the Ladies Yomp 2019