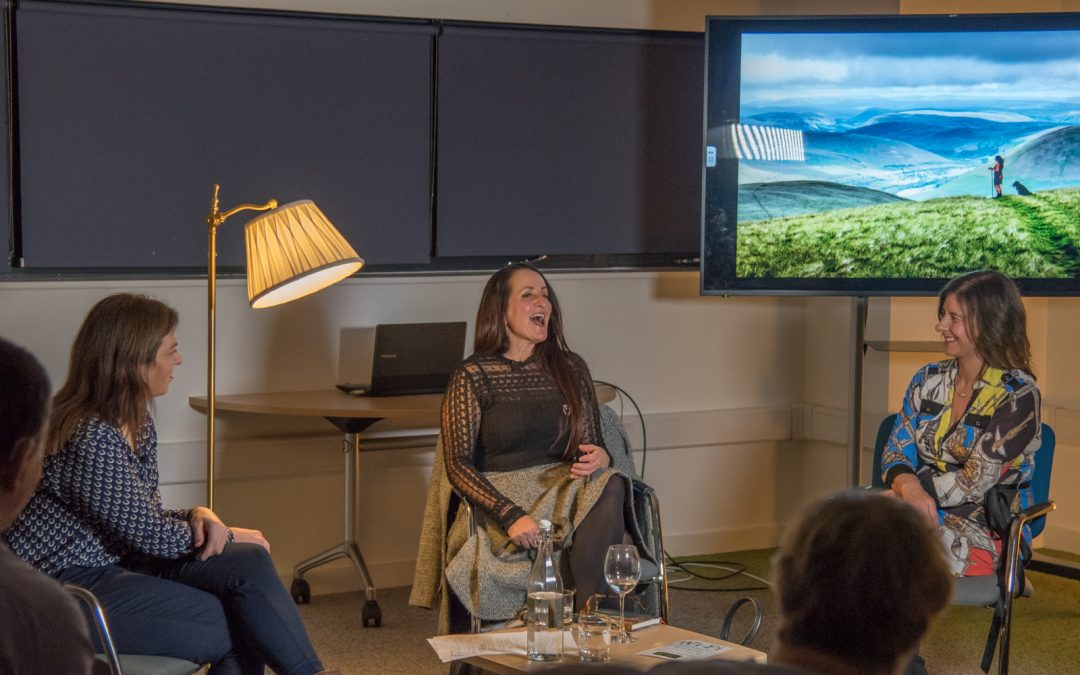 It was less auction mart and more TV studio at The Exhibition Hall at Junction 36 as an intimate audience settled down on Thursday 29th November to a compelling interview with Alison O’Neill, The Shepherdess. Vivid studio lights shone on Britain’s best-loved female farmer, her interviewer, the respected Cumbrian businesswoman Sue Howorth and Alison’s faithful sheepdog Shadow as never-before-told stories were shared to an audience of over forty of Alison O’Neill’s fans and friends.

A moving extract from Alison’s childhood diaries opened the evening. Twelve-year-old Alison’s hopes and dreams of becoming a farmer and shepherdess on a Dales farm, where it only rains at night and snows every Christmas were shared to an enthralled crowd. Little did Alison know then that many of her wishes would indeed come true, though not perhaps in the way she expected.

Private anecdotes from her Sedbergh childhood abounded; haircuts, nits, and barefoot walks on the fell. Interviewer Sue Howorth expertly navigated Alison through her personal journey, sensitively unearthing darker moments such as the impact Foot & Mouth had on Alison’s Howgill’s farm, Shacklabank, when it was in its infancy.

Sue Howorth said “I knew this particular story would be a tough one for Alison to share, however she was keen to spread awareness of The Addington Fund and hoped it may encourage other farmers to seek help should they ever need it.”  Proceeds from the night will be donated to The Addington Fund who helped Alison and her daughter Scarlett when they needed it most.

Alison explained what happened as Foot & Mouth tightened its grip on her farm.  “Whilst my animals weren’t diagnosed the restrictions on movement were crippling and I was just one of those farmers keeping my head down and desperately trying to stay afloat.  I was doing anything to make ends meet, even delivering Yellow Pages, but the phone kept ringing from people looking for money. In the end I unplugged the phone. It was difficult and like many farmers, we’re proud hard-working people. It’s just not in our nature to ask for help, so we don’t. One morning I cracked momentarily to a neighbour and admitted my fears and worries, I dried my tears having felt better for sharing and thought no more about it. The very next day there was a knock at my front door. It was some people from The Addington Fund, we talked, they understood. I had £60 in my bank, people wanting money, no food in my fridge and my daughter was a year old.  The day after, the people from The Addington Fund came back, they had two cheques. One to help with the farm and another for food for my fridge. They also started me thinking about farm diversification.”

It was Alison’s trailblazing diversification that would eventually lead to Alison earning not just from the livestock and land, but her way of life. Her barefoot walks on the fells followed by warm homemade scones and tea back in her farmhouse kitchen proved extremely appealing, even attracting celebrity visitors looking to reconnect with a simpler way of life. Before long, TV and radio appearances beckoned and Alison O’Neill is now one of the country’s most well-known farmers.

None of this has changed what Alison wants from life, her Howgills home Shacklabank is still a ‘one-woman-farm’ and her traditional farming methods have brought her even closer to the landscape as Alison now has her own fashion range created from wool spun from the fleeces of her flock.  The clothing range feels like the beginning of a new and exciting chapter and an extremely promising 2019 lies ahead.  On display on the night was Ian Lawson’s book The Shepherdess, the photographer has followed Alison’s shepherding life for the last eight years and the stunning photos compliment the reflective and honest words included which Alison herself wrote.

The evening itself marked the beginning of a truly thrilling 2019 which holds in store, more catwalk shows, TV appearances and exciting collaborations with charities such as Help for Heroes and Hells fells and soon Alison’s autobiography.

What would a twelve-year-old Alison say to her adult self today?