“We have gone through a cultural revolution – and I mean revolution – because actually, we needed to change” Phil Wild of James Cropper PLC 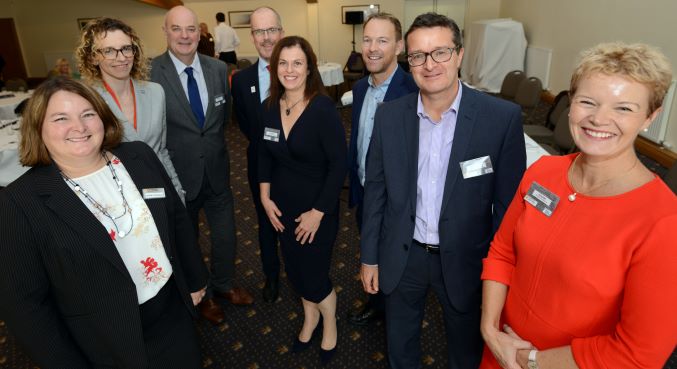 BUILDING an engaged and loyal team is one of the best ways to project a business as a fantastic place to work, a conference heard.

And having a plan to actively market a company to potential employees ‘who may not even know they want to work there’ will give bosses a head start in the increasingly tough battle for talent.

The two themes were high on the agenda as representatives from businesses across Cumbria gathered for a debate on how to be proactive in tackling the county’s recruitment problems.

The session was led by Joanne Stronach, the Head of Employment Law at legal firm Cartmell Shepherd, who said: “It was a great event and there was lots of different knowledge and experience in the room which was shared.

“People hopefully realised that they have to sell their business to the workforce out there as well as customers, and that it is a much more candidate-led marketplace that it has ever been.

“One of the ways we heard this is being done in practice – and this is the case at James Cropper – is using different levels of the workforce to help them achieve that. A great example was members of the team blogging and telling the story of the business and the roles they play in it.”

They gave candid accounts of some of the recruitment challenges they had faced, along with insights into some of the measures taken to address them.

Mr Wild and Mr Nicholson spoke of the various measures they had implemented over a six-year period to engage staff and grow the James Cropper brand across the UK, while using a variety of tools to project it as a great business to work in.

They included actively sharing success through storytelling and marketing, addressing anomalies with salaries the company had traditionally offered – which made it non-competitive in the jobs marketplace – and actively engaging with staff through surveys, bi-annual briefings and one-to-one feedback.

Mr Wild, who has been with the business for six years, said: “When I started, I saw a whole set of values in the organisation, some of which were spot on and some of which, frankly, were not.

“There was a very strong loyalty for co-workers and customers and a fantastic expertise which was just first class. But the business was very inwardly focused, very parental and quite hierarchical.

“It has been quite a challenging route, because we have tried to make changes in a subtle way where we were observing the good values that the organisation had, and changing others that were not destined to grow the business.”

The event was led by top legal firm Cartmell Shepherd, in partnership with The Family Business Network Ltd and was held at the Stoneybeck Inn in Bowscar, Penrith.

While outlining the importance of constantly marketing a business to potential employees, Zoe Pluckrose-Norman said: “I think we are all looking for a job all of the time. We just don’t know we are. Because of this, the way in which we recruit has dramatically changed”

She had outlined sector-specific challenges faced by Armstrong Watson – including zero unemployment and the specialist nature of their core business of accountancy – along with wider challenges which included managing the expectations of different generations during a recruitment process.

Top tips including using the best tools to attract the right candidates and how to manage an interview process were shared by Julia Cater, who also underlined the importance of ensuring all candidates – successful or otherwise had positive experiences.

Meanwhile, Mark Bowman discussed challenges brought about by the new GCSE grading systems – which is causing confusion among some employers – and dismay among young people on the receiving end. He also spoke passionately about the enrichment opportunities Inspira offers to young people – and encouraged companies to engage with schools as part of their external activities.

Karen Walsh of Paramount Legal Costs was one of the event delegates. She said: “I feel I learnt about much more than simply attracting talent.

“Listening to the guys from James Cropper made it feel like its OK that you can’t be perfect, and even at their size, you still have to learn and go through hard times, but knowing the goal is to make the company better.”

The event was the second in a series being held by Cartmell Shepherd. The first, their Family Business Summer Social was held earlier this year.

Details of a third event in the series will be released in due course.